How I came to help dental professionals like you

Dental Marketing Guy is Featured in:

I help dentists like you attract more patients through by providing SEO for dentists and dental professionals. While these marketing services can help you attract 30+ new patients per month, you may still wonder, who is “The Dental Marketing Guy?” 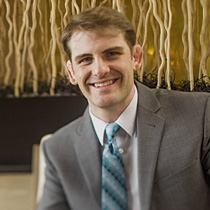 A little about me

I founded the Dental Marketing Guy brand that, in addition to services, provides a place for people of different circles within the dental community to share information, learn tools for business growth and connect with other successful dental professionals. Many have come to refer to me as “DMG” in Dental Town forums and social media. What I do is what I expect my clients to do: build a tribe, offer inspiration, education, and entertainment. I believe that without a sense of comradery, the dental industry is just like any other. It’s the relationships that are built within this community that shape the dental industry. I can introduce you to the right people in order to help you find success in your dental marketing!

Raised in San Luis Obispo, a college town on the Central Coast of California, I’ve enjoyed the benefits of living in a relatively small town with an ever expanding community. In my twenties, I decided that because of my love for the Constitution (and the higher quality of life we all enjoy because of it), I would become a criminal defense attorney and pursue my education at a local law school. Early in my studies I realized I didn’t enjoy the legal field – not the right fit for me – so I started moving closer to my career in the dental industry. More on that in a minute.

As you probably know, higher education isn’t cheap. Before I changed directions I had a little problem, I needed to pay for school.

As a competitive athlete growing up, I competed in wrestling, boxing and martial arts. Early on in my athletic career, I had a couple of serious injuries which sidelined my ability to perform at a world class level. Shortly after winning a silver medal at a jiu jitsu tournament known as the Pan American Games, I sustained a knee injury that made me ineligible for ongoing competition. At that point in my life I shifted my focus from competing to teaching.

I’ve trained with many UFC and boxing world champions, and since, have discovered that those who perform at the highest levels aren’t always the most effective at imparting knowledge to students. Coaches of world class fighters are often far superior at delivering knowledge to everyday people than the athletes who go on to win in the ring! This experience has taught me that the best coaches and the best athletes are sometimes different, but are both essential parts of a winning team.

I started teaching everything from boxing to wrestling techniques to my teammates, and quickly adopted a number of other students. My students thoroughly grasped concepts and went on to successfully execute the techniques they’d learned from me (in competition). They’d often remark that my teaching style allowed them to effectively learn faster than any of their former teachers.

I discovered something about myself: I’m a good teacher because I enjoy imparting knowledge to those willing to learn.

As much as I enjoyed teaching martial arts, it wasn’t covering tuition. One day, while coaching a boxing session for a local web designer, I took a moment to look around at the lifestyle he had; a huge house with an elaborate kitchen, a shiny black Mercedes–three of them, in fact–housekeepers, landscapers, etc…

I thought to myself “I wonder if I could design websites?”

While my student’s career success was visible, I realized I couldn’t just jump right into the business and start designing prolific, effective websites. I’d have to start small.

So that’s exactly where I started. I began designing cheap websites for anyone that would hire me. I did this for a while to gain experience. I had some rough interactions with clients who demanded a lot. I over-delivered, learned, then ultimately I found a problem with the business model…

I enjoy teaching about marketing. I’ll teach you how to gain new patients.

I saw that designing cheap websites didn’t do anyone any good in terms of generating new leads or building long term business relationships. That’s when I went to the white board. I made a list of all my clients. I noted all their different industries. I decided that, based on my continued pattern of success with one of my favorite clients in particular – a dentist – I would specialize in the dental industry. SEO for dentists, specifically. Dentists learn to master clinical skills, but become business owners by necessity. Most never stop their pursuit of knowledge and thus make great students, especially when it comes to learning how to build a more fulfilling practice!

While I’m confident that I can help deliver new patients to your office in a “full service” model, experience shows that the most rewarding practices have a successful team. I believe that beyond creating a website, it’s my responsibility to deliver SEO education and actionable marketing skills which help your whole team become more successful and fulfilled.

Simply put, I strive to create champions. In today’s “information age,” there is no shortage of marketing consultants who deliver copious amounts of information that leave you confused. Many dentists have described feelings of “information overload” when dealing with these consultants. I believe that my approach will help you grasp SEO and marketing principles which make things clear to you.

These principles help you know what you are committing to when working with any marketing professional. You’ll be a step ahead by knowing what is effective and why, so you don’t have to spend sleepless nights wondering about a return on your investment. Most importantly, you’ll learn how to measure success; and what is measured, can always improve. I’m a fighter, I’m up for the distance and dentists who work with me will tell you… I’m 100% on your team!

Could your dental practice use more patients?